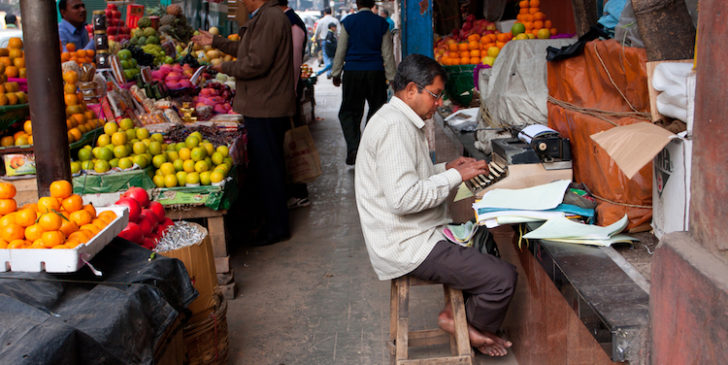 Poorhouse, beggars, dirt, and noise without end? Many people have a clear idea of Calcutta. They associate Kolkata, as the city is officially called, with Mother Teresa (1910 to 1997). While the nun is rightfully admired by many for her charitable work dedicated to helping the poor in Calcutta, her reputation had a lasting effect on the image of the city.

However, Calcutta is more than just poverty. Although it is undoubtedly apparent, a new middle class and hipster culture are thriving in the city and frequently visiting the clubs of the colonial period. Calcutta is not only a colorful and lively city, but also seen as the intellectual, artistic, and cultural capital of India.

A city full of vitality

Crackling noises fill the arcades opposite the courthouse. In Calcutta, typewriters are part of everyday life. Work is often done outdoors in the city in the Indian state of West Bengal, and many other things also take place in public. Not far from the clattering typewriters, tin pots stand on a high flame in kitchens, and men wash in a public fountain.

The city is full of life. Everywhere you meet smiling people, at the market and street stalls, in public buses, in the metro. The people in Calcutta are full of curiosity, helpfulness, and open-mindedness towards travellers.

A Foodies Paradise in Dacres Lane

Horn concert of boredom and praise

The vitality is also apparent in the 24-hrs-hustle and bustle when, for example, early in the morning at the flower market, heavily loaded porters make their way through the crowd. Or at any time on the Howrah Bridge, one of the most frequented bridges in Asia. It is estimated that every day, over a million people are using the bridge to cross the Hooghly, an estuary arm of the Ganges. They are going either on buses, taxis, trucks, cars, or on foot — all accompanied by loud honking concerts. Honking a horn seems to be a pastime for many drivers.

The AJC Bose Road is particularly noisy. Almost every car honks in front of the headquarters of the Missionaries of Charity, where founder Mother Teresa was laid to rest. The noise roars to her grave. Even in the museum room, where you can learn more about the life of the Nobel Peace Prize winner, you can hear the noise from the street.

The museum displays personal items of Mother Theresa, such as her grey travel bag or her sandals. Black and white photos show the young Agnes Gonxha Bojaxhiu, long before she became Mother Teresa and who is otherwise only remembered as old, small and slightly bent.

Mother Teresa’s Missionaries of Charity is open for visiting from 8.00 AM to 6.00 PM.

Calcutta is not only noise

There are also quiet corners, the pottery district Kumartuli for example. Here, the megacity shows itself from the most rural side, a Calcutta with village character. In small workshops, artists form sculptures of Hindu gods or Mahatma Gandhi in all kinds of formats and sizes for domestic use, festivals, and museums. The raw material is made of the mud of the Ganges. Everything in this seemingly village-like part of the big city is handmade. This applies to tailor’s workshops as well as to open-air barbers, sugar cane presses, and shoemakers.

Silence can also be found in the Botanical Garden, in the Anglican church of St. John’s, in the parks near Queen Victoria Memorial, on the river near the Hindu temple Dakshineswar Kali.

Here people dive into the turbid broth of the holy Ganges water, fill canisters and bottles for taking at home, and pray. Many come to the river because they or someone close is ill. They ask for the improvement of the condition and feel deeply relaxed at the same time.

However, going swimming in the Ganges isn’t necessarily something you should consider doing. The river is so heavily polluted with untreated sewage, industrial waste, and pesticides that parts of the river and its tributaries are disease-bearing, toxic, and carcinogenic.

When to visit Calcutta?

Located on the east coast of India, Calcutta has a typical tropical climate. The autumn and winter months between October and February are the best time to visit Calcutta as the weather is perfect, and the festivities are plentiful.